Here’s how to install the OpenStreetMap Nominatim service on your own server. It can be used to geocode and reverse geocode addresses and map coordinates. You will also get a web interface which loads map tiles from openstreetmap.org while doing geocoding requests using your own server.

I was faced with thousands of geocoding requests per hour, and with such a high volume it is not wise to burden the global OSM servers. Even with aggressive caching it would have potentially been too much.

I will use Ubuntu 14.04 LTS as the platform. Just a basic install with ssh server. We will install Apache to serve http requests. Make sure you have enough disk space and RAM to hold the data and serve it efficiently. I used the Finland extract, which was about a 200 MB download. The resulting database was 26 GB after importing, indexing and adding Wikipedia data. The Wikipedia data probably actually took more disk space than the OSM data. My server has 4 GB RAM, which seems to be enough for this small data set.

We must increase kernel shared memory limits. Also we’ll reduce swappiness and set the kernel memory overcommit to be a bit more conservative. Make sure you have anough swap space, more than physical memory is a good idea.

These have been estimated using 4 GB RAM.

The following directives were set in /etc/postgresql/9.3/main/postgresql.conf:

The buffer and memory values depend on your available RAM so you should set sane values accordingly.  These are good for 4 GB RAM.

There are two truly dangerous settings here. Setting fsync off will cause PostgreSQL to report successful commits before the disk has confirmed the data has been written successfully. Setting full_page_writes off exposes the database to the possibility of partially updated data in case of power failure. These options are used here only for the duration of the initial import, because setting them so makes the import much faster. Fsync and full page writes must be turned back on after the import to ensure database consistency.

The synchronous_commit also jeopardizes the durability of committed transactions by reporting successful commits to clients asynchronously, meaning that the transaction may not have been fully written to disk. It does not compromize  consistency as the two previous directives discussed. It just means that in the case of power failure, some recent transactions that were already reported to the client as having been committed, may in fact be aborted and rolled back. The database will still be in a consistent state. We’ll leave it off because it speeds up the queries, and we don’t really care about it in this database. We can always rebuild it from scratch. But if you have other important databases in the same database cluster, I would recommend turning it back on as well, since the setting is cluster-wide.

The maintenance_work_mem will also be reduced to a lower value later, after the import.

We will also make “nominatim” a database user, as well as the already created “www-data” (created by the apache2 package).

Nominatim will be a superuser and www-data will be a regular one.

This must be done as a database administrator. The “postgres” user by default is one (root is not). Change user:

Set some environment variables. We’ll use these later. These are the download locations for files and updates. Lines 3 and 4 below are for Finland. Customize to your needs.

Also set the BASE_URL to point to your server and install directory. The last forward slash seems to be important.

You can browse available areas at download.geofabrik.de.

Clone the Repository from Github

We will use the release 2.3 branch:

The –recursive option is needed to clone everything, because the repository contains submodules.

If there were no errors, we are good. In case of missing libraries, check that you installed all requirements earlier.

Some required settings should go to ~/Nominatim/settings/local.php:

The last four definitions are only required if you are going to do incremental updates.

OpenStreetMap data (about 200 MB for Finland):

The OSM data is all that is really required. The rest below are optional.

Next we’ll import all this stuff into the database.

The utils/setup.php will create a new database called “nominatim” and import the given .pbf file into it. This will take a long time depending on your PostgreSQL settings, available memory, disk speed and size of dataset. The full planet can take days to import on modern hardware. My small dataset took a bit over two hours.

The messages will be saved into setup.log in case you need to look at them later.

If you had the Wikipedia data downloaded, the setup should have imported that automatically and told you about it. You can import the special phrases data if you downloaded it earlier using these commands:

Now that the import is done, it is time to configure the database to settings that are suitable for production use. The following changes were made in /etc/postgresql/9.3/main/postgresql.conf:

You should also set the synchronous_commit directive to on if you have other databases running on this same database cluster. See the PostgreSQL Tuning section earlier in this post.

The following commands have to be run as root.

Create a directory to install the site into and set permissions:

Ask bots to keep out:

The installation should be done as the nominatim user:

Run the setup.php with the option to create the web site:

At this point, the site is ready and you can point your browser to the base URL and try it out. It should look something like this: 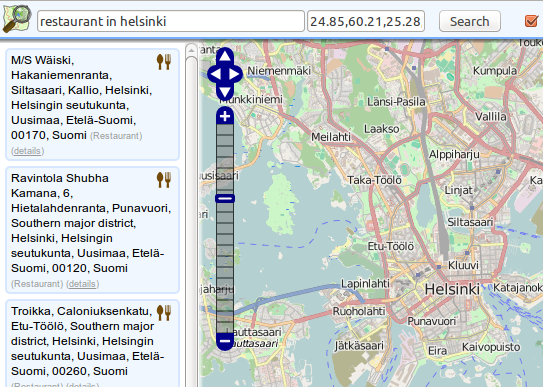 We will configure a cron job to have the database updated periodically using diffs from Geofabrik.de. As the nominatim user:

Enable hierarchical updates in the database (these were off during import to speed things up):

Run once to get up to date:

There seems to be a time check in the import function that prevents another run immediately. Instead it will wait until the interval configured in the “Configure Local Settings” section earlier in this post has passed (default is 1 day).

We will add the command to crontab to be executed every monday at 03:00. Run:

Add a new line to the crontab file looking like this:

That’s it! You can get JSON or XML data out of the database with http requests. A couple of examples:

Check out the Nominatim documentation for details.

This post was adapted from my notes of such an installation process. Let me know in the comments section if I introduced any mistakes. Other comments are also welcome!